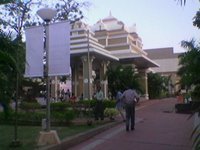 On last Sunday when there was no work, we as a family decided to go to Chennai Trade Centre.
What was up? Not a regular consumer exhibition. But a different one.
ACMEE - 2006 Industrial Exhibition.
The event overview said that the "focus is on the products, solutions and services in the areas of CNC machine tools, automobiles, mechanical and plant engineering, electrical engineering, electronics, information technology (IT) and software."
The words included all the branches of engineering. What else can create curiosity among parents with a son just completed 12th class and waiting to join engineering courses!
We took a bus to the centre as we were scared of a weekend traffic on the road to and beyond Kathipara.
Well designed campus with ample parking area, not seen in many of the shopping complexes in Chennai nowadays. There was an entry fee and we were allowed inside with an identity card, with our names printed on it.
For us the machines looked as though they were from Mars! But we decided to walk through the exhibition.
Simple wired mesh patterens, poultry nettings on a metal craft stall were familiar 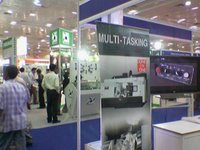 . The huge forging machines were not. The people manning the stalls with neat 'corporate uniforms' were waiting for business enquiries.
We weren't the people they were looking for. But we would have liked if someone said what those machines are used for. Just an intro to a layman.
A house hold remote control was interesting. You can switch on / off your fans and lights with a remote control which does not interfere with your TV's and AC's remote.
The battery operated stackers were displayed on the floor. Do they help in industrial stacking or stacking of goods in shopping mall or heavy books in book stalls and libraries?
Regent Biochem India P. Ltd were seen circulating a green brochure. It said they provide environmental friendlty solutions to industries in disposing of their wastes, innovative concept in industrial cleaning. A must for the changing world and what every child should learn to preserve the nature.
Electroninc weighing machines, holograms, electrical switches and plugs, we walked ahead of these displays.
The king of the exhibits was a metal cutting machine by Neotech. It operates with plasma power source. Attached to a Auto CAD machine, you can draw your designs and cut it with high precision. Not you - it is used in vessel manufacturing industries, mining & automobile manufacturing units. Everytime a visitor wondered what the machine is doing, the exhibitor, demonstrated a cut! A patient and industrious exhibitor.
At the end all that one could see was representatives from various companies grabbing brochures for their bosses to sit and read leisurely. Not many students from schools or even colleges. 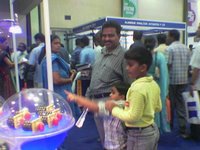 But a father of two kids was trying to expalin all that he could to those curious ones.
They are strange visitors for the business people.
But they are the future science and engineering students. They are the future manufacturers and consumers of these exhibits. May be these industrial components light up an idea in their minds and they become grassroot innovators.
When so much is talked about the innovations and L-Ramp awards are being announced every year and when there is a forum for India Innovators, why not the kids be taken to such exhibitions and explained about the present facilities and future scope?
Can our city schools take their eyes away from text books and 100% results for a while and initiate such steps?
This will surely go a long way in real education of this generation.
Posted by Revathi R at 6/15/2006 03:01:00 PM 1 comment:

Day 2 at the training. 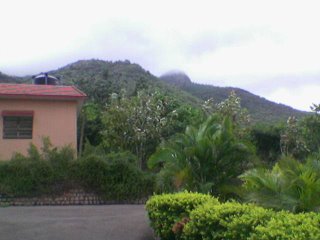 Yes, the water was ice-cold. The institute follows the system of solar heaters. The weather was chill and so the water.

Today we were on time for breakfast. Many known faces - teachers who were part of the programme we met the previous day.

Both Kathik and I were looking forward to the other 'unknown' group. We swaped our groups and went to the hall.

Fresh morning, fresh team and all were ready for the games.
Interesting moments - when a team had to agree on some issues, because of a team member being a Physics teacher; a team in which it did not strike for one that there is no oxygen in the moon, two teachers, who could not solve a mathematics puzzle, interestingly both from English department and all of the group laughing at a person lablelled to do so. . . 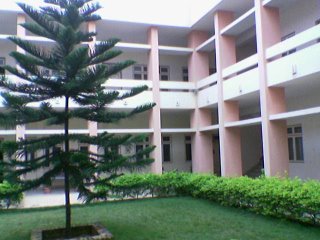 The open minded teachers were rocking.
The management was supportive.
The senior teachers were seen mingling with the new comers.
All good signs of a group of new generation teachers ready to give education a different dimension.
The student community is in safe hands as of now.

But with the rush for technical degrees all to end up in a typical BPO / IT job, I really wonder where one could find good, dedicated teachers for the future generation kids!


We had to quickly pack up after the lunch to catch the train back to the ever hot city Chennai at 2.40pm.

I had been thinking about a professional assignment from EZvidya, till I landed at a heavenly pleasant place called Mangarai, near Coimbatore.

For people from Chennai, 23 degrees at Coimbatore and even chiller weather in Mangarai Village, situated within the reserve forest area is like being in Ladak during summer! 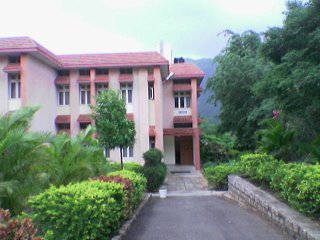 This was not a holiday trip. But a holiday camp for teachers of a school from Tiruppur. This is one of the prestigous schools in the T-shirt town, Tiruppur, we are told.

The place of the camp was a perfect one - The Karl Kubel Institute for Development Education. The well developed institute with library, Internet and canteen facilities apart from the greenery and colourful flowers in the well maintained campus.

We landed at the place early in the morning - I mean myself and Karthik, another trainer from Chennai.

After a night long journey, both of us checked in to our rooms and had a nap till 9.

After freshening up, we went to the canteen for a breakfast. They have strict time table - good for people on diet - and the staff provided three idlis to each of us from the left overs and a cupful of tea.

That made us rush for the lunch on time!

We just spent time shooting pics. The clouds over the hills, the green plants, the building where we stayed and so on... 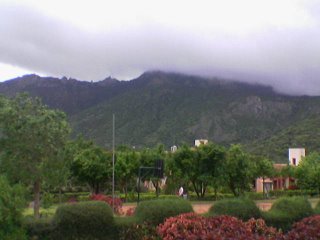 The workshop was to start at 2, but the team arrived after 3pm.
Probably they enjoyed their trip from Tiruppur to this place, that made their journey a little longer than it usually is.

Karthik and I divided the team into two groups and handled sessions individually.

Karthik, being a theatre person, made the session more physical with inputs on body language, voice modulation and the like.

My session was more of games, involving psychological aspects.

The grouping game, an icebreaker, did break the ice. The mathematics teacher could not instantly make out the difference between 3 pairs and 6 legs! The group broke into laughter.

At the end of the session one teacher came out plainly saying that she felt lost when she could not fit into one particular team. But, I should mention that the same teacher said at the end of the session, "I realise that I have to take the initiative to be a part of any group and not wait for invitation to join them." The first step towards success!

After a coffee break, the session went on till 8pm. I could not see a single tiresome face in the team. I should appreciate the team for enthusiastic participation, including the principal and the correspondent. Or should I take some credit for myself for keeping the session lively?

After dinner, we retired to our rooms. It was chill outside. The sound of the wing blowing filled the room though I carefully closed every opening.

I browsed over the feedback from the participants of the day and felt happy. I guess this gave me encouragement to wake up only to bathe in cold water of temperature - 3degree Celsius!
Posted by Revathi R at 6/07/2006 08:40:00 PM 1 comment:

Yes, bloggers are! But how long? As long as "the mainstream media is dumbing down with a vengeance and looking to their bottom line rather than people who live at the bottom" they are in business.

"I firmly believe that blogging is not just about having your own online diary or journal. It is much more than that. Many bloggers will tell you of their addiction to blogging that goes well beyond just writing a piece. How many active bloggers can really say they do not start their day looking for reactions to something they wrote the previous day? Or checking if someone has linked to something they've written? "

But all these 'good words' were spoken in October 2005. After six months, the views are same and still going stronger!

Revathi R
Paper and pen have always fascinated me. When in school, I got published in a kids' magazine; I also got published in the Youth supplement of a leading daily for a couple of times. My career too gave me an opportunity to write long credit proposals similar to analytical reporting in journalism. Changing career, I began writing for financial websites and now I write for leading websites and newspapers on arts and classical music. I edit and publish the online magazine for Chennai kids - www.yocee.in and its ePaper YOCee. I love to see the young people write as much as I love to.